Start a Wiki
Megan Denise Fox is the actress that portrayed Jennifer Check.

Megan Denise Fox (born May 16, 1986) is an American actress and model. She began her acting career in 2001, with several minor television and film roles, and played a regular role as Sydney Shanowski on the Hope & Faith television sitcom. In 2004, she made her film debut with a role as mean girl Carla Santini in the teen comedy Confessions of a Teenage Drama Queen. In 2007, she co-starred as Mikaela Banes, the love interest of Shia LaBeouf's character, in the blockbuster action film Transformers, which became her breakout role. Fox reprised her role in the 2009 sequel, Transformers: Revenge of the Fallen. Later in 2009, she starred as the eponymous lead in the black comedy horror film Jennifer's Body. Fox is also considered one of the modern female sex symbols and has appeared in magazines such as Maxim, Rolling Stone and FHM.

Fox was born in Oak Ridge, Tennessee, the daughter of Gloria Darlene (née Cisson) and Franklin Thomas Fox, a parole officer. She is mostly of English ancestry, with smaller amounts of ancestry from elsewhere in Europe. She was raised "very strictly Pentecostal", but later attended Catholic school for twelve years. Fox's parents divorced when she was young. Fox's mother later remarried, and she and her sister were raised by her mother and her stepfather, Tony Tonachio. She said that the two were "very strict" and that she was not allowed to have a boyfriend or invite friends to her house. She lived with her mother until she made enough money to support herself.

Fox began her training in drama and dance at age five, in Kingston, Tennessee. She attended a dance class at the community center there and was involved in Kingston Elementary School's chorus and the Kingston Clippers swim team. At 10 years of age, after moving to St. Petersburg, Florida, Fox continued her training. When she was 13 years old, Fox began modeling after winning several awards at the 1999 American Modeling and Talent Convention in Hilton Head, South Carolina. At age 17, she tested out of school via correspondence in order to move to Los Angeles, California.

Fox has spoken extensively of her time in education; that in middle school she was bullied and picked on and she ate lunch in the bathroom to avoid being "pelted with ketchup packets". She said that the problem was not her looks, but that she had "always gotten along better with boys" and that "rubbed some people the wrong way". Fox also said of high school that she was never popular and that "everyone hated me, and I was a total outcast, my friends were always guys, I have a very aggressive personality, and girls didn’t like me for that. I’ve had only one great girlfriend my whole life". In the same interview, she mentions that she hated school and has never been "a big believer in formal education" and that "the education I was getting seemed irrelevant. So, I was sort of checked out on that part of it".

Fox began dating actor Brian Austin Green in 2004, after meeting on the set of Hope & Faith; she was 18 years old, while he was 30. They became engaged in November 2006. In February 2009, it was reported that they had ended their engagement, before becoming engaged again on June 1, 2010. Fox denied these reports, stating that they had been continuously engaged since 2006. The couple married on June 24, 2010 in a private ceremony at the Four Seasons Resort on Maui. They have three sons: Noah Shannon Green (born September 27, 2012), Bodhi Ransom Green (born February 12, 2014) and Journey River Green (born August 4, 2016). Through her marriage, Fox is also a stepmother to Green's son Kassius (born March 2002), from his past relationship with actress Vanessa Marcil. In 2009, Fox was targeted by a group of fashion-motivated criminals known as "The Bling Ring", who robbed Green's home because she was living with him.

Fox has been open about her feelings on men and socializing, stating that although she has more in common with men in their thirties, she has a general distrust and dislike of "all boys-slash-men," and that, despite the public perceiving her as a "wild and crazy sexpot," she is antisocial and has only been sexually intimate with two men her entire life – "My childhood sweetheart and Brian. I can never have sex with someone that I don't love, ever. The idea makes me sick. I've never even come close to having a one-night stand." She would rather stay at home and play games instead of going out. Fox commented, "My biggest regret is that I've assisted the media in making me into a cartoon character. I don't regret what has happened to me, but I regret the way I have dealt with it."

In September 2008, Fox alluded to being bisexual in an interview with GQ magazine. She said that, when she was 18 years old, she fell in love with and sought to establish a relationship with a female stripper. She used this experience to illustrate her belief that "all humans are born with the ability to be attracted to both sexes". In May 2009, she confirmed her bisexuality, stating: "I have no question in my mind about being bisexual. But I'm also a hypocrite: I would never date a girl who was bisexual, because that means they also sleep with men, and men are so dirty that I'd never want to sleep with a girl who had slept with a man." In the June 2009 issue of Elle, she revealed that she somewhat distorted the events of her relationship with the stripper, saying she has given certain male writers "an amped-up version" of her past – "They're boys; they're easily toyed with. I tell stories and have them eating out of my hand. Not all of it is true. In fact, most of it is bullshit." Fox said, "I never said she was my girlfriend! I just said that I loved her, and I did love her. The real story is more sobering. It's not a sexy, fun-time, fantasy story. But that's not the story you tell GQ."

Fox has a form of brachydactyly called clubbed thumb, and has discussed her obsessive–compulsive disorder (OCD), insecurities, self-harming, and has acknowledged that she has low self-esteem. She stated of her OCD, "This is a sickness, I have an illness -- this is not OK anymore." 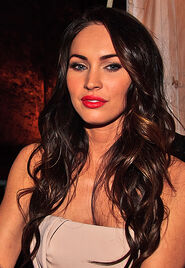 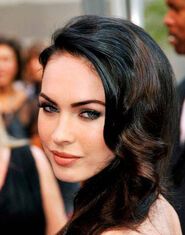 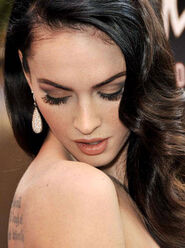 Add a photo to this gallery
Retrieved from "https://jennifersbody.fandom.com/wiki/Megan_Fox?oldid=4928"
Community content is available under CC-BY-SA unless otherwise noted.