Start a Wiki
Chastity, portrayed by Valerie Tian, is a minor character in Jennifer's Body.

Chastity is smart, nerdy, opinionated, and often rude to others, especially Needy. She's first seen at the beginning of the film, having attended one of the high school pep rallys with several other high schoolers. Catching Needy and Jennifer waving hello to each other with smiles, Chastity accuses Needy of being "totally lesbi-gay", though Needy denied the subject, saying that Jennifer's "just a friend", Chastity mocks Needy by waving and giggling, much to Needy's annoyance.

Chastity is of Asian origin. She has thin, scarce eyebrows that are delicately trimmed, along with a pixie/bob cut hair style with atrifical highlights and low lights. Her nose bridge is small, slowly extending out at the nostrils. Her eyelashes are very thin, appearing as if she didn't even have any and her lips are heart-shaped and plump in size. 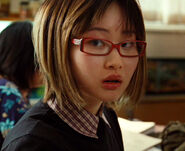 Add a photo to this gallery
Retrieved from "https://jennifersbody.fandom.com/wiki/Chastity?oldid=4682"
Community content is available under CC-BY-SA unless otherwise noted.