In March 2008 Seyfried was cast in the comedy horror film, Jennifer's Body. In the film Seyfried was cast as Anita "Needy" Lesnicki, the title character's best friend. The film, which premiered at the 2009 Toronto International Film Festival and was released to theaters on September 18, 2009, received mixed reviews from critics.

Seyfriend has stated that she suffers from anxiety and panic attacks. She also suffers from stage fright and has never preformed in theater because of it.

Seyfried has a taxidermy collection. Some of her collections contain a baby horse, a fox, an owl, a mouse, a goat, a hybrid taxidermy deer, butterflies and Conan O'Brien gave her a taxidermy raccoon attached to a jet pack as a gift for her collection during an appearence on Conan. Since October 2013, she has been dating actor Justin Long. 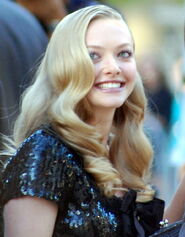 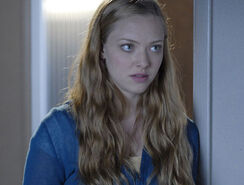 Add a photo to this gallery
Retrieved from "https://jennifersbody.fandom.com/wiki/Amanda_Seyfried?oldid=4846"
Community content is available under CC-BY-SA unless otherwise noted.